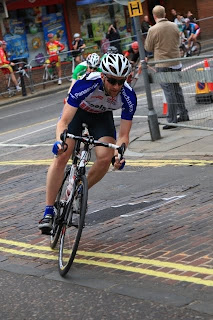 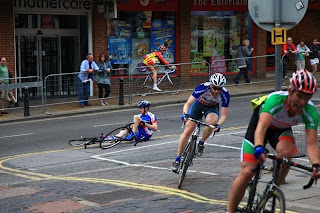 After a couple of weeks off of racing I embarked on my first attempt at the Guildford road race.
I arrived early for a good warm up knowing that this 30 minute race was going to be all systems go right from the gun. This included checking out the cobble stones and my particular concern being the fast corner going into market street, which meant skimming french connection on uneven ground at speed when the road sloped away from you as you negotiate the turn.
After receiving some last minute tips from my trainer and coach for the evening Stuart Harris I joined the line up and witnessed the josseling for a good position on the line. I didn't expect it to be quite so aggressive into the first corner and I got boxed out which meant by the end of the first lap I was halfway down the field.
So I made my best efforts to get as far up the field as possible before the race settled down and the gaps got larger. The circuit was very tough and what with my early efforts I found myself really suffering the last 10 minutes although this did not mean I lost any positions in the race. Due to the speed we were going it meant there was little time for recovery, furthermore people were not riding together as it was every man for himself.
Noteable incidents were a blow out for one chap on the market street corner (see above image), plus another guy also coming a cropper on the same corner but on a different lap. Fortunately I just missed the first of the two crashes. I clipped the curb coming onto the cobbled high street through trying to use the full width of the road but that was only a glancing blow and no harm done.
I ended up with two charlotteville guys and although I tried an attempt at breaking away it failed a few laps before the end, so they both beat me over the line. We finished something like 12-14 place. Which considering my start I am happy with.
I must say that racing infront of a large crowds three deep in places and cobbles felt like a real step up and I thoroughly enjoyed it, the fact that the rain stayed away was a real plus. If I am in shape next year I would love to give it ago again, having experienced it for the first time and knowing what to expect.
I hope you are all well and enjoying the warm weather and getting plenty of miles in.
Posted by Mark Workman at 08:56