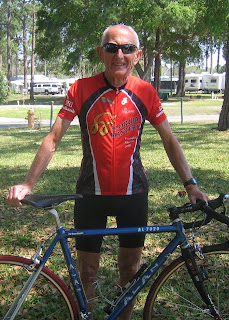 While we were in Florida during the winter I was involved with the forming of a cycling club for us older guys. It is called “Florida Masters Cycling”. The aims of the club are “To support, enhance, and promote the performance, fitness and safety of men and women Masters level cyclists in Florida”. At the moment there are very few senior category races in Florida above the 55 plus age group. The idea is to encourage promoters to include the higher age groups by guaranteeing them an entry in a given category to make it worth their while.
There were seventeen of us involved in the inaugural meeting counting as founder members. The jersey design is typical American and depicts a snake in the shape of a bicycle with rider. This I resisted but was outvoted as they insisted that it was an indigenous species of Florida. The original seventeen of us have “Founding Member 2010” on the front of the jersey which is nice. I felt that this should read Founder Member but had to bow to our Canadian President and close friend who is an ex English language teacher. We have a total of eight fully paid up sponsors so far all depicted on the jersey.
There is quite a good web site and if you go to www.flmasters.com you can view membership information, photos, member’s biographies etc. Also if you go to http://floridamasters.blogspot.com you can read about the club’s current racing results together with corresponding pictures.
I hope this may be of interest to some of you particularly if you are considering visiting Florida at anytime.
BryanS
Posted by BryanS at 21:29