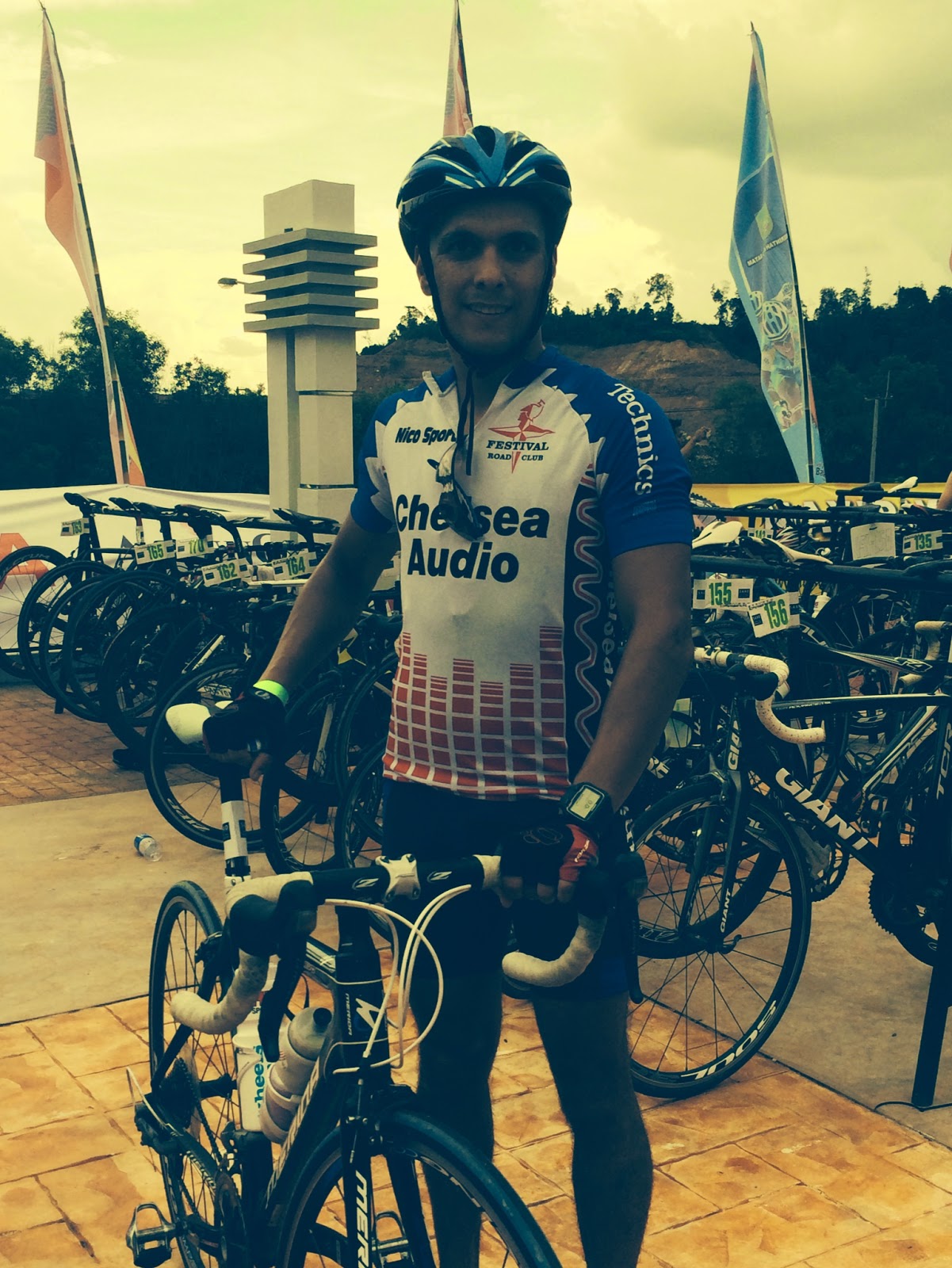 Havnt posted since my first triathlon so though this would be a good one. be great to get some tips as i had a few issues.

I was easily convinced by my girlfriend' brother Darrell to join him in the Bintan 6 bridges 134km race in Indonesia. I did a couple of training runs to try and get used to the distance but bonked at 100k. The night before the race I stripped all my accessories from my bike to make it as light as possible. I prepared mashed sweet potato and raisins for my fuel for the race, rice and eggs for breakfast and  my own homemade electrolyte drinks from water, lemon, salt and honey. I met Darrell at 6am at the ferry terminal in Singapore where the race organizers sorted everything from visas to bike transfer, we passed through the electronic immigration and I was on the cat 2 boat before I knew it. I signed up for cat 2 as cat 3 was full. Donning my festival kit some young bloke called Max said he knew the club from when he lived in the uk he cycled with the festival old boys (even older that my dad) and he tried to convince me to start with cat 2 but I'm rubbish and Darrell was cat 3 so I 'missed' the cat 3 start.It was 36 and 41 degrees and high humidity (as it usually is on the equator) through the ride and continuos undulating hills proved a killer from the start but with the 100 odd racers fighting hard for the back the pace wasn't too bad at all. After the controlled 17k start to the main start from the ferry terminal onto quieter roads a few attack attempts were unsuccessful. I was following my triathlon coach 'Michael Lyons's' tip to stay near the front and get with the break away group as there will be less chance of a crash due to better riders in the break away group. Before I knew it I was indeed with the breakaway group. It was hard, but being cat 3 also known as the girls race as all the women start with cat 3 and generally are faster than most of cat 3 men it was about 32 ave as a lot of hills and the view wasn't too bad. I got dropped at 85k and rode on my own for the next 53km jumping on the back of stragglers where i could, they would take me ahead for a while and I would drop back, each time i would pass a local who couldn't speak English and then he would pass me when I fell of the stragglers, maybe I should of paced with him, not too sure what the right tactic was there. Every KM took longer and longer and every hill got harder and harder. After passing the finish I stopped off at a shack on the side of the road for a coconut just before a storm came in which canceled prize giving as everything blew away.A very well organized promoter got us all on busses out of the storm and to the ferry terminal for a boat back to Singapore.I think I need to work on my bike set up as I had a really saw bum from the very start, my left hand and fingers went numb. Also my little toe on one foot goes completely numb and I had to take my foot out the shoe and peddle on top of the shoe until it goes back to normal.Next week cycling bintan Malaysia and two weeks later cycling Singapore to malacca. Then a few running and triathlon races to prepare me for my half iorn man in bintan Malaysia in august.
See you soon, Laurence