Do you remember riding with Tony Whitmore? 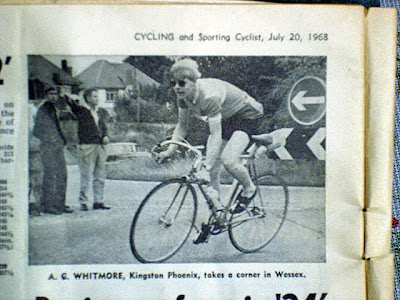 Had a message (below)from Tony Whitmore who many of you may remember riding with in the 1960's onwards. Let me know if you want to make contact:

"Hello Colin, Many thanks for your reply, most welcome.

Over 40 odd yrs ago, memories get a bit stretched - particularly when I have had a scotch or three when I actually get around to looking at my mail of an evening! You are going to think me mad as a hatter now - I have downloaded your photo's and yes I am positive I recognize Baz / knew him on the road etc. on the two old photo's (we all had similar race ones taken then didn't we? ) and I well remember the surname. But you have jolted my memory with the others you mention. The person I was actually thinking of the other night (but quite wrongly associated with your name) was - Alan Fidgett !!??

It is he who will well remember me as the 'nutter' referred to in my 1st mail. Tuesday & Thursday evening training runs starting from the Toby Jug pub in Tolworth - used to be a whole gang with other club riders joining in (like me and Pete Miles from the Phoenix). Bryan Staples and Adrian Morris ring a bell, John Froud of course. There was another guy - I can't remember at the moment - but he was a good roadie / sprinter (could have worn glasses - I think) but I will know his name when mentioned. Crystal Palace on a Thursday evening - the handicap all category road races that usually ended in a bunch sprint - Your guys used to ride there , so did I, Peter Miles and Barry Arnison from the Phoenix. I did finish in the 1st dozen one night and I am sure (the sprinter guy in the glasses ?from Festival may have been ahead of me - I'm sure was). But I did actually beat John Sargent, Norwood Paragon then. Not bad for 16yrs old ?? Cock a hoops until Pete Miles (Surrey RR junior champ in 1968 (could be '69) actually won ahead of everyone one night (he was the same age as me - no one could believe it ! probably the older guys thought he was a lap behind?) Barry Arnison who was a senior (about 5 yrs older than Pete and myself ) and recorded faster times and wins in TT's and BBAR placings - but he could sprint only like a donkey. Bob Woodley (of the Phoenix and later Twickenham CC) was not actually racing in those late 60's days as he was travelling the world - but as you older guys will know - he actually made quite a name for himself in road races in the early to mid 70's. The Phoenix still have an amazing guy in the form of Ray Dare and his age related records now - he doesn't look any older than he did in 1966. I will attach a photo - it will jog the memory of Alan, maybe yourself and others. taken during the Wessex 24 hr in '68. I was just 16yrs old. No slouch though as less than two months before I rode a 2-7-50 open 50 when I was still 15yrs old. Now you recognize the "nutter" tag given to me by Alan and others. Ah well, carefree days, (I don't think so really) The only thing I can remember is unlimited amounts of energy - what happened to it?

By all means ask around the club - place on blog (with cuttings !!) I only potter about now and then on the bike - you know how it is, on cold dark winter nights before January 1st and when the 12 yr old malt is flowing - going to crack eggs with big sticks this year- never seems to happen does it ? (actually it does in your case) . Got 5 sons from ages 34 to 22 yrs. Two are good part time racing bikies - because of committments, one who races and trains in Italy where his business is based, the other with Army CC. Something rubbed off then.